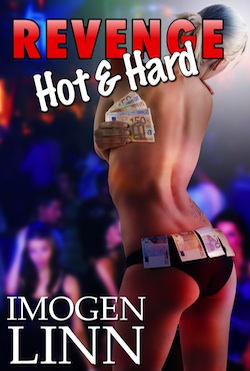 When her husband Mark lost his job, Julie kept the two of them afloat by using her pole-dancing hobby to get a second job in a strip club.

Mark seemed very happy about having a stripper wife, always pushing her to go farther and do more with the customers. But, Julie was a happily married woman who took her marriage vows seriously.
When she finds out Mark’s been cheating on her, Julie takes her revenge by putting on a sizzling performance that shows Mark just what he’s always wanted, and exactly what he’ll never have again.

This story of a wife’s red-hot revenge is approx. 7,300 words of scorching sex, on stage and in public.

Now she was up on stage, having just started her routine. Julie searched the crowd whenever she could, her eyes straining to pierce the darkness around the stage, looking for that familiar figure … there. Mark was standing in the audience, smiling up at her – he’d even brought flowers. He must have been feeling guilty again about fucking that little chippy behind her back … perfect
Julie climbed back onto the pole, making it spin slowly around, gripping it between her thighs and laying back, her arms spread wide. Reaching behind her back, she untied her bikini top, pulling it off to cheers from the audience and dropping it to the floor – so far, so normal.

Julie had been dancing at this club for months, so the regulars in the crowd knew what to expect. Showing them her boobs was always the last part of her act, and Julie could sense their surprise when she carried on dancing, strutting up and down the stage with tits bouncing, her fingers holding the ties of her bikini bottoms.
She teased the crowd, mercilessly – tugging the strings a little and then shaking her head and turning her back to the crowd as if to walk away. She put one hand up by her ear, as if to help her hear the cheers, gesturing ‘more, more’ with her other hand. She got what she wanted. The crowd roared, lots of them shouting, “take it off” as a small flurry of bills flew onto the stage.
Julie found Mark’s face in the crowd, and kept her eyes on his as she slowly pulled on the strings to undo her bikini bottoms, letting them fall to the ground to stand on stage wearing nothing but a pair of stripper heels.
She was surprised not to feel more nervous than she did – after months of dancing topless, going completely nude didn’t seem like all that big of a deal. Julie did enjoy all the cheers and applause though, she pranced up and down the stage, flashing her ass and pussy to the crowd. She had nowhere for them to tuck their bills, now. So, when she crawled to the edge of the stage to collect her tips, Julie would let the guys touch her as she collected each bill – letting them stroke the smooth curve of her ass or brush her nipple with their fingertips. It was a real thrill to let a crowd of strange guys feel her up like this, and Julie was soon tingling from the sensations of all the hands touching her body. Her eyes sparkled, and her cheeks were flushed.
Gradually, she raised the temperature of her performance – not just showing off her body but running her hands over her skin. Cupping her breasts as if offering them, tweaking her nipples, pinching and tugging the tender buds until they stood out, hard and proud.