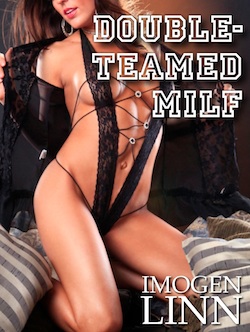 Stephanie is a hot, newly-single soccer mom renting a room to two college boys. When the boys’ date storms out in disgust, Stephanie discovers it’s because they’d suggested giving her a DP.

As the evening progresses, Stephanie realizes that it’s not just her two empty beds the guys are eager to fill.

“I know, right?” Josh agreed, taking the joint. “Ow!” he exclaimed, putting his burnt fingers in his mouth. “This thing is done. Shall we roll another?”
“Hell, why not?” Stephanie laughed, “It’s been way too long since I had any fun. I’m in the mood to get a little wild, tonight.”
Stephanie saw Ben and Josh look at each other, sharing a significant, speculative glance. Even through the mellowing haze of the marijuana high, she felt that tonight was heading into unexplored territory. She felt relaxed, happy, and very horny, and the slight bulges she could see shifting around in the boys’ boxer shorts were getting more and more fascinating, the higher she got.
As he lit up the next joint and handed it to her, Josh said, “We think about you, sometimes, too, you know.”
“You do?”
“Yeah,” Josh agreed, “not just us, either.”
“Mmhmm,” Ben took the joint, his hand sliding over hers much more than was necessary, the touch making her pulse race, “remember when we had our friends, Dave and Jacob, over, to watch the superbowl with us?”
Stephanie nodded.
“Well, Jacob couldn’t stop talking about how hot you were, and how perfect your breasts are.”
“That’s right,” Josh continued, waving the joint to emphasize his point, “remember how he tried to bet us a hundred bucks they weren’t real?”
“Oh yeah,” Ben replied, “I’d forgotten all about that.”
“What?” Stephanie exclaimed, “what do you mean ‘tried’? You wouldn’t take his bet? You think these are fake?”
“Well…” Josh started, but didn’t get any farther before Stephanie had grabbed his hand and pushed it inside her robe, placing his palm onto the soft mound of her breast.
“There,” she said, triumphantly, “does that feel fake to you?”
Josh’s hand gently gripped the firm flesh, and Stephanie could feel her hard nipple rubbing back and forth against his palm as he squeezed.
“God, no,” Josh moaned, “that feels fucking awesome.”
He cupped her breast, taking her nipple between thumb and forefinger and pinching it, softly. Stephanie’s eyes drifted closed and a soft sigh escaped her lips.
Her eyes opened as Ben slid his hand, tentatively, inside her robe and placed it on her other breast. Stephanie looked at the hopeful, wondering expression on his face and leaned back, enjoying the sensation of being touched after so long.
The two boys cupped and squeezed her breasts for what felt like ages, the delicious sensations sending a warm tingling through her body and making her pussy pulse. Stephanie could feel herself getting wet, especially when she looked at the tight, muscular bodies of the two boys, and the bulges in their shorts – bulges which, now, were anything but slight.
Stephanie put her hands on their bodies, feeling the toned muscles shifting beneath her touch as they both leaned down to take a nipple into each of their mouths, sucking and nibbling. It felt incredible. She had never been with more than one man before – and hadn’t been with anyone but her ex-husband since they met in college. Now, ten years later, two hot hunks were pushing her back onto the bed, laying her down as they knelt over her, sucking and biting on her nipples. She put her hands out to either side, searching for the hard bulges of their cocks. She squeezed the hard shafts through their thin cotton boxers, drawing a soft moan from each of them.