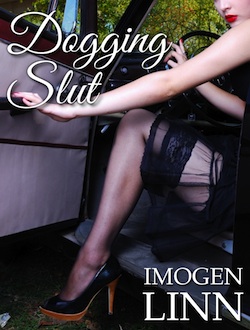 Anita controls men – her beauty and her smoking hot body turning them to willing servants. But, the tables are turned and she gets blackmailed into driving to an isolated parking lot and putting on a sex show for a group of random strangers. The experience unlocks a deep, dark desire that she didn’t know she had – the desire to be used as nothing but a fuck-toy slut.

It wasn’t just faces she could see surrounding the car, now. All of the men were masturbating as they watched her, and she could see several cocks just outside the car, hands sliding up and down the hard shafts as they watched her play with her pussy.
Cocooned by the car, she felt both exposed and protected as she performed. Anita stared at the cocks around her, teasing the men by looking up to catch their eyes and lick her lips, or pouting outrageously as she rubbed particularly hard at her swollen clitoris.
She was getting more and more aroused, now, her whole body writhing in the seat as she dug her fingers into her pussy, bracing herself with a hand on the glass of her window. She felt something bumping against the glass, and saw a hard cock being pressed to the glass outside, where her hand was.
Anita smiled, wickedly, and started sliding her hand up and down the window glass, as if stroking the hard shaft. The men soon picked up the game, and several cocks were soon pressed to the window. She shifted in her seat and used both hands on the glass, going from cock to cock and ‘stroking’ them, looking into their owners’ eyes, when they would meet her gaze, and licking her lips.
Anita had had several lovers, of course, but her sex life until today had always been quite conventional – herself and one man, in the privacy of a bedroom. She wondered how it would feel to have a cock in each hand as she stroked two men at once. She imagined pressing the button to slide the window down, then reach out to grasp those hard shafts. The thought made her pussy tingle, and brought a soft moan to her lips.
Her face was just a few inches from the glass, her hands spread to cover two cocks, when she saw a third, directly in front of her, the purple head pointed at her face, a hand blurring up and down the hard shaft as the man jerked off over the beautiful naked slut in the car before him.
Anita had an idea. Cupping her breasts in her hands, she pressed them to the window, directly in front of his cock – the glass cold and hard against her sensitive nipples. She looked him in the eye and raised an eyebrow, grinning at him in a silent challenge to spray her beautiful tits with his seed. She felt the impact as his cum hit the window, splashing against the glass and slowly trickling down.
Anita kept her eyes on his as she pressed her face to the window, opening her mouth and sweeping her tongue up the glass. The hot wave of arousal she felt as she mimed licking up a stranger’s cum, in front of many more, was breathtaking. She let out something between a moan and a laugh as it coursed through her.
Her mind seemed fogged with lust, and the glass was suddenly intolerable – she wanted to feel those hot, hard cocks in her hands. Anita watched her own hand, which seemed to be acting all by itself, as her finger pressed the button to wind the window down…